Gaming, Pc , Xbox, WiiU What comes to mind when you think about these? Your favorite game? You have friend who game? People who game? Your children game? Your husband/wife?

Gaming has taken over the world by storm. Not only is an outlet for those who need a break from the “real” world, but it is a way to meet people from all over the world. Gaming can take you places you only dream of. I was on social media the other day and I saw this post about this group of guys who were talking about their “gaming” friend who had passed away and made inside jokes about him and how good of a guy he was. Gaming helps form real friendships. They may only know each other through a headset, but they formed a bond that was created into a true friendship.

Now, there are pros and cons to gaming, just like everything else in the world. When I was growing up, we had the Cube and Nintendo 64 , we were limited on how long we could play and it was not a big thing. My sister and I would play for awhile, but our parents wanted us to spend more time outside. Nowadays, gaming has developed into more of a “social outlet” You meet so many people from other places and you might even get to meet them in person. Parents let their children spend hours gaming on their platforms from their phones, to PCs,  to Xbox and playstations. If you were to look around social media, people would be making millions of dollars just off gaming. People would have the “high tech” resolutions, the gaming chairs and mouses. Why? To help them perform better, to make more money , essentially making their own business. These people are called “Gamers” and these Gamers would make sure they are updated on the next best game or next best Graphic card, just to make more money on their “business” Now, this may sound exciting and fun , to be your own boss. That just means you have put your work into it. As they say ” Spend money, to make money” I know a group of gamers who took over 10 years to grow their business and they started from the ground up. They put themselves out there and adjusted to the changes these gaming companies are throwing at them. They learned how to make their own music, created their own logos and eventually become their gaming group.

Gaming started in the 1970s from Atari ( as many of you know as the famous Pong, which I am sure my mom and dad played) Once pong became a great hit for everyone, that is when gaming took off.  More space , better designed and single player /

Multiplayer was born. Soon, internet interaction took over, where you can interact with people from different places around the world. Better graphics and more detail started to take over. Better story modes and even more options on all the games themselves. They started created bigger and better games, which meant the Gamers had to buy upgraded material to keep on playing these games. All sorts of games came out from Minecraft, to Battlefield to even Sims. Any game made for all ages. Nowadays, the schools are pushing more “interactive” video games on school approved websites ( yes that is a form of video gaming).

With that said, Another form of gaming was being formed. Before you could play in your own home, arcade business would have all the games you need at your fingers for a quarter or more.  You could hop over to the Arcade and play all sorts of games and win prizes. That quickly moved to games where you would win the prizes in the games such as skins, weapons and coins.

Just two days ago, I had some friends come to this huge gaming and Animation Event called “RTX” we all decided to go and meet up with some youtube gamers that we all loved. Just from that gaming community, we are able to learn about different cultures around the world. We were given the opportunity to meet our “Australian and Canadian” friends who were apart of this community. Last year, we had our Irish community come out to the event. We are all from different parts of the world, but the fact that we take time to visit each other in person, that is where the relationships are formed.

With all that said, I am a girl, I was born a girl 🙂 The video gaming world was male

dominate for the longest time. Being a woman in a this type of male dominate hobby, takes some courage. There are times when the men get offended when females are able to compete with them or times when men will “socially” attack a woman , because he feels dominate in this field. When more woman started getting involved it was like everything shifted, not only did woman want to learn the games, they wanted to become the best. If you were to look at a youtube algorithm, depending on the game or “gaming facts” the male to female percentage would have a huge difference, some people have actually turned off their “female” settings , because that is how low it is. My point being, I am a female and when I play certain video games, I will hear phrases like ” If we don’t win this one, you belong in the kitchen. ”  or ” Of course she is not listening, she is a woman and she does not belong here.” Since internet interaction was created and the ability to socialize through headphones was created, people have found it easier to say anything they would like in the head phones. Again, did I mention there are pros and cons to video gaming? 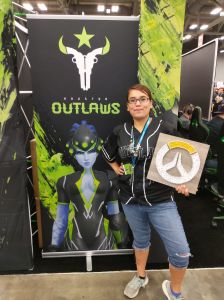 One thing about gaming that is a “con” is the fact that we may not get the “exercise” that we need to keep our own bodies healthy. I found myself falling into “snacking” more while gaming or drinking more. Why? because I mindlessly did it. I mindlessly ate and drank. So, maybe my parents were right when I needed more time outside, before I spend hours on gaming. As I said, there are pros and cons to everything and sometimes finding that right balance can be hard.

Gaming has taken over so much, that they have made competitive teams for it. They have made teams from all over the world to win. Just a like sport. When they first started making these “competitive” teams, people thought it was a joke, but these teams are making more money and travel the world doing something that they love. It amazing me how much the world has changed and how much we are adjusting to the change of the world. Gaming can take us to places we can only imagine. I saw a movie once where they use Virtual Reality (VR) of an ocean for a girl who was disabled and could not travel. They use the ability of the  (VR) so this girl could experience other parts of the world.

Who knows we may become like the move “Ready Player 1” and VR will be our whole world. Like everything else in this world, Gaming is a subject that goes back and forth. When do I introduce my child to video games? How long should they be being playing? Is gaming healthy for you? So many questions that have several different answers and yet, we will do it. Why? Because it is what make help you make money. It is like your own little business that you can take control and have another form of income.

Hello :) I just want share my live of being adopted and in foster homes. How I managed to get to where I am and where I want to go View all posts by Samantha

This site uses Akismet to reduce spam. Learn how your comment data is processed.